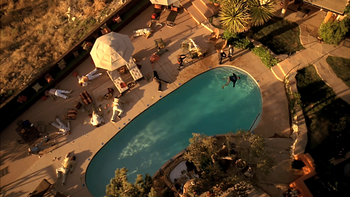 Killer party!
"There’s no place for emotion in this. You of all people should understand."
— Don Eladio
Advertisement:

As Gus, Jesse, and Mike make their way to the cartel's base of operations in Mexico, Skyler tries to contact Walt about their birthday present for Junior. Since Walt isn't picking up his phone, she decides to give him his present, herself: a PT Cruiser. Junior politely accepts the gift, but compared to the Challenger he had before, it's just not as exciting...

As Saul contacts Ted Beneke to inform him that he had earned an "inheritance" from "Great Aunt Birgit" to the tune of a little over $600,000, Gus, Jesse, and Mike arrive at the Cartel's laboratory, where Gaff and the Cartel's scientists will determine the quality of Jesse's cook. The chief chemist is less than enthused with working alongside someone as young and seemingly inexperienced as Jesse, his concerns becoming all the more pointed when it becomes apparent that Jesse doesn't know how to synthesize phenylacetic acid, an ingredient in Walt's formula that Gus had always provided at his own superlab. As the chief chemist berates him and Gus, Jesse, in an unexpected show of courage, tells the chemist that the only way they would learn his cook is if it's done his way; there would be no cooking until the lab was clean and he had his phenylacetic acid. Both Gus and Mike are surprised but pleased at Jesse's assertiveness.

Junior drives his new PT Cruiser to Walt's condo, concerned after not seeing him all day. Walt reluctantly allows Junior inside, who is shocked at his father's injuries after his fight with Jesse. Junior prepares to call Skyler, but Walt, groggy from a long night, begs him not to, explaining that he had been "gambling" again. He breaks down in tears in front of his son, who helps him back to bed. Walt asks Junior if he likes his birthday present. When Junior politely says he does, Walt sleepily replies "That's good, Jesse..." before passing out.

Meanwhile, in Mexico, Jesse finishes his batch of meth. Members of the cartel watch and record on video every tense moment of the cook, and the cartel chemists take a sample of the meth to a gas chromatograph to measure its purity when the cook is done. The final result is 96.2% purity; not as high as Walt's cook, but enough to put the cartel's own cooks to shame. As everyone celebrates Jesse's cook, Gaff claps him on the shoulder and says "The first of many", clarifying for Jesse that with this cook, he now belongs to the cartel, leaving Jesse worried...

Back in Albuquerque, Saul visits Skyler at the car wash. He had been reluctant to give Walt's money to Ted to help him pay off his debts, and his misgivings were vindicated when his private investigators learned that Ted used the money to lease a Mercedes a scant three hours after receiving it, completely blowing off his debts and his obligations to the IRS.

Walt awakens in his condo, finding that Junior had stayed with him the entire time after he fell asleep by telling Skyler he was staying with a friend. He plays off his sorry state from the previous night as the result of "beer and painkillers". Afraid of what Junior thinks of him, Walt tells him a story about his own father, Junior's grandfather; when Walt was young, his father suffered from Huntington's disease, a degenerative illness of the brain. Walt had always heard stories about the kind of man his father was from those who knew him, but the only memory of him Walt had was when he visited him in the hospital at a very young age. At that point, the disease had progressed into its final stages; he was barely recognizable, his breathing heavily labored and his eyes seeing his son, but not appearing to recognize him. Walt's father died not long after, and Walt did not want Junior to remember him as a pitiable, sick man. Junior, however, says he wouldn't mind remembering him like that; he was more afraid of remembering him as acting so strangely over the past year, and that at least the previous day, he seemed "real"...

After sending Junior back home, Walt is approached by Tyrus, who simply asks: "Somewhere you should be?"

At Beneke Fabricators, Skyler sees Ted in what remained of his office after his business was liquidated. She asks him about his finances, and Ted talks about starting his business back up thanks to an unexpected "cash infusion". Skyler urges Ted to pay his debts to the IRS, reiterating that she would be found culpable in his willful tax evasion and they would both be in prison, especially after the IRS finds out that she and Walt bought their car wash with illicit money. Ted continues to brush off Skyler's advice, leaving her incensed; before she leaves, she asks him if he really got that money from "Great Aunt Birgit", revealing to him exactly where that money came from...

Back in Mexico, Gus, Jesse, and Mike are standing poolside at Don Eladio's estate, with Mike assuring Jesse: "Either we're all going home, or none of us are." Don Eladio, accompanied by his men, greets Gustavo and embraces him, happy to see that he had finally seen reason and accepted the cartel's deal. After introducing Eladio to Jesse, his new chemist, Gus offers a gift to celebrate their new friendship; a bottle of Zafiro Añejo, a rare premium tequila. Eladio decides to share it with Gus and all of his friends (except for Jesse, whom Gus explains is an addict who must stay sober), and they share a toast. Eladio waits to drink until he sees Gus do the same, but Gus takes his shot without hesitation.

Afterwards, Eladio throws a poolside party. He sits down with Gus and tries to explain that there was no ill will for him; everything, from his disrupting his meth business to the death of his friend Max, was "just business". Afterwards, Gus excuses himself to the restroom, where he turns on the sink, then forces himself to vomit into a toilet.

Shortly afterwards, Don Eladio's men begin to drop dead, one by one. As Eladio begins to feel weak, Mike strangles Gaff with a garrote as Gus returns to the now ending party, Eladio's men dead around him. Eladio realizes that he and his men had been poisoned by Gus and lurches towards him, but the last of his strength finally leaves him and he collapses, dead, into his pool.

After Mike takes Eladio's necklace, Gus begins to feel weak as well; he had poisoned himself with the tainted Zafiro Añejo as part of his plot to destroy the Cartel and took measures to prevent himself from dying, including taking an antidote and purging some of the poison in the restroom, but some poison managed to find its way into his bloodstream. With support from Jesse and Mike, Gus yells his ultimatum to any Cartel members within earshot:

"Don Eladio is dead! His capos are dead! You have no one left to fight for! Fill your pockets and leave in peace...or fight me, and die!"

With that, the three make their escape. Jesse finds a car he can use to make their getaway. One lone cartel gunman opens fire on them, hitting Mike before Jesse fires back and kills him. With Mike wounded and Gus dying of poison, Jesse makes a hasty escape with them in tow...