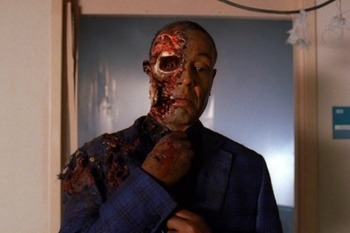 Just another bad day at the office.
"I won."
— Heisenberg
Advertisement:

After his plan to kill Gus with a car bomb failed, Walt hurriedly removes the bomb from Gus' car and rushes into the hospital to ask Jesse if there is any other way to catch Gus off guard. Before Jesse can answer, however, he is taken into custody by police to answer for his claim that Brock was poisoned with ricin.

As detectives grill Jesse, Walt tries to find Saul to help get Jesse released—Saul had absconded when the situation with Gus became dicey. Walt breaks the office's window to get in, and Saul's secretary Francesca chews him out and refuses to give Saul's location until he pays for the window and for her pain and suffering; more money than he has on him. He makes his way back home to get his money, but stops when he realizes Gus' men may have his home under surveillance as they wait to kill him. He calls his neighbor to check in on his home, telling her that his family was on vacation and he wanted to make sure he didn't leave the stove on. As he suspects, Gus' goons are watching his home and the neighbor's arrival forces them out. While they're outside, Walt sneaks into his house to take some of his money for Saul's secretary.

Back at the police station, Saul arrives and forces the detectives to leave while he consults with Jesse. When asked about a way to get at Gus, Jesse thinks of one thing: after killing Don Eladio, dismantling the Cartel, and killing Joaquin, Gus paid a visit to a nursing home to gloat over Hector "Tio" Salamanca.

When Walt learns of this, he travels down to Casa Tranquila to talk to Hector. As Hector seethes in white hot rage at Walt's presence, Walt calmly states that while Hector may want him dead, there is someone else that Hector loathes even more: Gustavo Fring. Walt promises Hector that he can get his revenge against Gus if they work together.

Afterwards, Hector calls in his nurse and, using a letter board to communicate, tells her "NEED DEA". After some confusion, the nurse takes Hector to the DEA, where he insists on talking with Hank Schrader. Even though Marie, Skyler, and Junior are certain this is a trap, Hank meets with Hector. Once they are face-to-tace, though, Hector does nothing but taunt Schrader, using his aid and her letter board to tell him "SUCK MY" and "FUC", neither of which Hank needs to hear completed.

The meeting with the DEA serves its purpose, however: Tyrus has been tailing Hank and therefore sees Hector leaving the DEA office.

Jesse is informed by the detectives that a tox-screen run on Brock revealed no evidence of ricin poisoning. As such, Jesse is let off the hook and is free to leave. As Jesse leaves, however, he is tased and abducted by Gus' men. Tyrus, who had come to Hector's bedroom after his return to Casa Tranquila, informs Gus of Jesse's acquisition and Hector's apparent betrayal. Tyrus offers to take care of Hector, but Gus is adamant on ending matters with Hector himself.

Gus arrives at Casa Tranquila and, after Tyrus gives him the all-clear, confronts Hector, calling him a coward for meeting the DEA and a "crippled little rata". He takes a syringe of poison from Tyrus, informs Hector that it would be his last chance to look at him, and prepares to inject him.

To Gus' surprise, however, Hector looks at him and meets his gaze. Hector's face is one of sorrow and remorse, but then turns to one of rage and hatred as he begins to tap furiously at his bell. Little did Gus and Tyrus know, at some point before Tyrus entered Hector's room, Walt had attached his bomb to Hector's wheelchair and rigged it to detonate when he rang his bell enough.

Gus realizes this moments too late: the bomb goes off, killing Hector and Tyrus instantly and mortally wounding Gus, who leaves the room and straightens his tie as the nursing home staff look on in horror at the sight of half of Gus' face being blown off, exposing part of his skull, before he collapses and dies.

Walt is parked at an airport, listening to the news on the radio. When he hears of the Casa Tranquila bombing and reports of three people being killed, he departs immediately for the superlab, where Jesse is being forced to cook by one of Gus' guards. Walt kills two of the lab's guards and frees Jesse, informing him of Gus' demise.

The two then set about to open every chemical container in the lab, flooding the floor with volatile chemicals, then rigging a frayed wire to a Christmas light timer, leaving the lab before the timer goes off, igniting the chemicals and destroying the superlab with a powerful explosion.

On the roof of the hospital, Jesse tells Walt that Brock is expected to make a full recovery: it wasn't ricin that poisoned Brock, but a common plant called "Lily of the Valley", which has poisonous berries that children may eat, thinking it edible. Gus didn't poison Brock after all. Nonetheless, Walt reassures Jesse that Gus had to die, and they did what they needed to do.

Walt calls Skyler, who saw the news of the Casa Tranquila bombing, and asks him what he did. Walt simply answers, "I won." Satisfied, he drives home.

Unbeknownst to Jesse, Walt has a particular potted plant in his backyard: a Lily of the Valley...

♫ Until you travel to that place you can't come back
Where the last pain is gone and all that's left is black... ♫