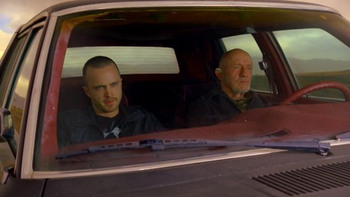 Jesse takes a ride with Mike.
"You're gonna do what you're told, which is to sit here, shut up, and stay in the car 'till we finish our pickups. You got it?"
— Mike
Advertisement:

Walt races down the streets of Albuquerque, desperate to save Jesse after he thinks Gus has taken him away to kill him. He calls Saul, instructing him to give Skyler his money if he doesn't contact him in the next twenty-four hours; then Skyler's voicemail, telling her that he loves her. He clearly fears that he may die in the coming confrontation, so he keeps his gun in close reach, just in case. He drives to Los Pollos Hermanos and demands to talk to Gus, but the cashier tells him that he is not in. Walt decides to wait. He receives a call from Mike, and demands to know if Jesse is okay. Jesse, still rather detached, tells Walt he's riding with Mike and isn't being threatened, but he has no idea where he is going. Mike tells Walt that he'll have to cook on his own today, but Walt is still determined to confront Gus. He barges into his office, but finds it empty...

Meanwhile, out in the desert, Jesse begins to feel on edge. He holds his keys between his fingers, prepared to use them as a weapon if the worst comes to pass. Instead, Mike drives off the side of the road, parks his car, and goes to get a shovel. Jesse is convinced this is it: Mike is digging a shallow grave for him.

Instead, however, Mike merely digs up a bag of money, which he places in the trunk. Jesse's not going to die: instead, he is to ride along as Mike picks up various dead drops around New Mexico, of which there are still six...

As Hank and Tim discuss whether Gale is Heisenberg and whether Jesse, one of the few people known to carry blue meth, was his killer, Jesse continues to aid Mike in picking up his dead drops, thinking he's supposed to be keeping guard. He tries to ask Mike if he's officially his assistant, and whether he's his new "guy". Mike doesn't reply at first, but eventually barks at Jesse that "you are not the guy—you're not capable of being the guy," and that he doesn't know why Gus ordered Mike to take Jesse along with him.

Back at the lab, Walt manages to get a cook started, albeit with great difficulty. He returns home after work, so he and Skyler can sign the papers that officially grants them ownership over Bogdan's car wash. Skyler tells Walt that for this venture to work, they must be completely honest with one another. Walt agrees as Skyler plays back her voicemails, and hears the one Walt left for her earlier, saying he loved her. There is a moment's silence between the two of them before they rush to their bedroom to have passionate sex. After Junior returns home, Skyler suggests Walt move back home, to make things "easier to explain".

Walt returns to the lab, and tries to operate a forklift to carry a barrel of methylamine across the lab, but struggles to do so, eventually getting frustrated to the point where he screams at Gus through the camera, stating that the lab needed two people to operate, so he wasn't doing any cooking until Jesse returns. Tyrus enters the lab, and takes control of the forklift to transport the methylamine: it seems Walt's going to be working without Jesse for some time...

Meanwhile, while Mike is picking up his last dead drop, he leaves Jesse behind to watch the car. Jesse sees two men approaching him, one carrying a shotgun. Worried that Mike would be robbed, or worse, Jesse shifts the car into reverse and makes his getaway. He picks up Mike in town that evening, explaining what happened. Mike is impressed with Jesse, and lets him smoke as a reward.

When Jesse returns to the lab, he explains what he had been doing to Walt, who finds the fact that he was supposed to protect Mike hard to believe. Meanwhile, Mike and Gus discuss Jesse. The gunmen approaching Jesse during the last dead drop pickup were a plant—men working for Gus and Mike to test Jesse, a test that he unknowingly passed, and make him feel like a "hero."

After work, Walt and his family eat dinner at the Schraders'. Hank talks about Gale Boetticher, describing him as a meth-cooking genius, and that his notes contained information and schematics for a meth cook operation the likes of which he could never have imagined. Walt, just a little bit tipsy from wine but very much drunk on his own ego, dismisses Gale's notes as simple note-taking, and that the real "genius" could still be at large. This leaves Skyler very worried, and convinces Hank to look at the case once more.

The following morning, Hank confides in Marie that he had been looking into the Heisenberg case for a while. He takes another look at the crime scene photos, and notices something peculiar: a Los Pollos Hermanos napkin with a serial number written on it in Gale's apartment.

"Since when do vegans eat fried chicken?"