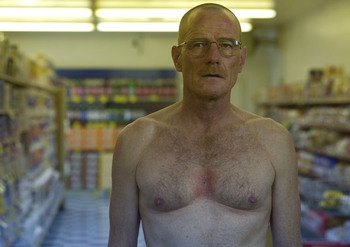 "He was naked. Naked. In a supermarket. It wasn't Whole Foods, was it?"
"Doctor, my wife is seven months pregnant with a baby we didn't intend. My fifteen-year old son has cerebral palsy. I am an extremely overqualified high school chemistry teacher. When I can work, I make $43,700 per year. I have watched all of my colleagues and friends surpass me in every way imaginable, and within eighteen months, I will be dead. And you ask why I ran?"
—Walter White
Advertisement:

With Tuco dead, Walt and Jesse bury his guns and devise a plan to explain their conspicuous disappearances. Walt catches a ride on a pick-up truck, then, once he's back in Albuquerque, walks into a grocery store and starts stripping off his clothes until he is standing naked with a vacant look upon his face.

Walt is admitted into a hospital, where he is reunited with Skyler and Junior, claiming to be unable to recall the events of the last few days: he was suffering from a fugue state.

Meanwhile, Jesse sits in a car with Badger near his house, which is under police surveillance. Once the police leave, Jesse and Badger sneak in to collect Jesse's cooking supplies and RV and have them kept in storage at a lot owned by Badger's cousin, Clovis. Clovis states that his fee for towing Jesse's RV is a thousand dollars. Jesse is short, but promises to pay him back in full. With a vote of confidence from Badger, Clovis agrees to keep Jesse's RV at his lot. Afterwards, he tells Badger to call the police from a pay phone.

While Walt is kept at the hospital to ensure he doesn't suffer from another fugue state, Jesse rents out a room with Wendy at a motel. The police barge in and apprehend Jesse. Hank interrogates Jesse, stating that he knew he was connected to Tuco, but Jesse claims to have been staying at the motel with Wendy the entire weekend. Wendy, who recognizes Hank from when he introduced her to Junior and thought he was trying to solicit her services for him, corroborates Jesse's story, mainly to spite Hank.

Back at the hospital, Walt is informed by his doctor once more that he can't be released until they are certain he won't have another episode. Annoyed, Walt asks how long that could take, and the doctor informs him that they need to keep him under observation for at least some weeks, maybe even months to make sure. Walt, taking advantage of doctor-patient confidentiality, admits that he made up the fugue state, claiming that he just wanted time to himself, away from his family.

At the police station, Hank and Gomez bring in an eyewitness who could implicate Jesse: Hector Salamanca. Even though he was present when Tuco had Jesse and Walt detained, Hector, an old-school cartel big-shot, refuses to cooperate with the authorities, going so far as to soil himself to spite Hank. With nothing to tie Jesse definitively to Tuco, the DEA has no choice but to release him.

Jesse calls Walt at his hospital room to inform him that the DEA bought his story, but Hank had taken his money and car, leaving him flat broke. Walt asks if Jesse can retrieve the RV so they can resume their operations, but Jesse hesitates. Walt mulls over his finances, then remembers that he had some cash stashed away. He sneaks back to his house to confirm that his cash is still there before catching a bus back to the hospital.

Back at the DEA, after looking over video of a methylamine heist (not realizing Walt was involved) and theorizing that the thieves cooked the blue meth for Tuco, Hank attends a party held to congratulate him for bring down Tuco Salamanca. His colleagues present him with a gift: Tuco's "grill", preserved in a cube of lucite.

Walt is finally released from the hospital and allowed to return home. His relationship with Skyler becomes tense, however, when she questions him on whether he has a second phone. Walt just, still feigning confusion about the events of the weekend, denies that this is the case. He leans in to kiss Skyler, but she turns away...