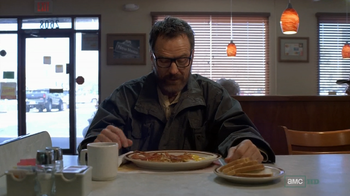 A disheveled old man walks into a Denny's restaurant and orders some eggs, bacon, and hash browns for himself. When his meal is served, he breaks the bacon into a few pieces and arranges them into the number "52", for today is the fifty-second birthday of this man, Mr. Lambert.

It's not apparent to the staff working at Denny's, but "Mr. Lambert" is actually Walter White: older, rougher-looking, and in failing health. He has not come to this Denny's just for a warm meal, however: he is meeting with an arms dealer, Lawson, in the mens bathroom about a peculiar purchase. Lawson only requests that Walt guarantees him that the purchase won't cross the Mexican border; Walt in turn ensures him that it will never even leave town. After giving Lawson his money, and paying for his meal with a very generous $100 tip for the wait staff, Walt goes to his car to stow away his purchase, alongside an M60 machine gun...

Back in the present day: after disposing of the materials used to build the bomb that killed Gus, along with the Lily of the Valley plant he used to poison Brock to turn Jesse against Gus, Skyler and Junior return home. Junior is excited that, with Gus' demise, Hank will be seen as a hero for investigating him. Skyler, however, is very wary of her husband, whom she realizes is the one responsible for Gus' death.

Walt's relief is short-lived, however, when he remembers that Gus had security cameras installed in the now-ruined superlab, which Hank and Gomez find in the rubble.

In Mexico, Mike, recovering from his gunshot wounds from the Juarez Cartel, is informed by Dr. Goodman of Gus' fate. Realizing what had happened, Mike high-tails it back to New Mexico to kill Walt. He finds Walt in the desert with Jesse, but before he can shoot him, Walt warns Mike about Gus' security cameras: if the DEA recovers the footage from the cameras, they would all be identified and arrested. Mike explains that Gus kept his surveillance footage on his laptop, which is now in an evidence locker at the Albuquerque police department.

A fierce debate is held between Walt and Mike on how to destroy the laptop. Walt suggests using a bomb (which he refers to as a "device"), but Mike finds the plan to be incredibly stupid and dangerous. Jesse, however, has an idea that might work: using a powerful magnet. They agree to lease an electromagnet from the junkyard that helped Walt and Jesse destroy the RV, powering the device with several car batteries in a moving van. A test of the magnet on another laptop proves successful: the powerful magnet fries the hard drive before sending it flying out of Jesse's hands and crashing against the van.

Meanwhile, Saul visits Skyler at the car wash to inform her that Ted Beneke was in an accident. He survived, but when Skyler visits him at a hospital, she is horrified to find him in a neck brace, paralyzed from the neck down. A terrified Ted promises her that, in spite of what happened to him, he would never tell anyone about her role in the accident.

That night, Walt, Jesse, and Mike infiltrate the APD's parking lot and bring their van with the electromagnet just outside next to the evidence room. When they activate the magnet, all computers in the police station go offline, setting off alarms. Walt, ignoring Jesse when he says they should leave, cranks the power on the magnet as high as it will go. In doing so, he gets the van stuck to the wall of the police station and sends everything in the evidence room, including Gus' laptop, crashing into the wall.

When the police go outside to investigate, they find the van and the magnet, but no one inside. Walt, Jesse, and Mike make their escape in Mike's car. As Jesse celebrates their success, Mike questions Walt as to the wisdom of potentially abandoning evidence tying them to the caper. Walt coolly explains that the van had no fingerprints on them, and nothing to tie them to the crime, but Mike remains unconvinced. He asks Walt how he knows the heist worked, and Walt replies, "Because I say so."

As the police pick through the ruins of the evidence room, noting that the laptop was destroyed, they find an old picture of Gus and his late friend and partner Max, on the back of which was a list of overseas banking account numbers revealed when the picture slipped out of the frame during the magnet heist...

Walt visits Saul's office, where Saul tries to justify why he helped Skyler give the bulk of Walt's money to Ted to pay off the IRS. Walt is unimpressed. Saul reprimands Walt for giving his wife such reckless free reign over his finances, particularly in regards to Ted Beneke, as he hands Walt the ricin capsule that he had Huell swipe from Jesse as part of his plan to frame Gus for Brock's poisoning. Saul is upset that Brock ended up in the hospital from the poisoning scheme; apparently Walt had not told him the full plan. Exasperated, Saul lambasts Walt, proclaiming "I'm done!" Walt, however, tells Saul "We're done when I say we're done.", and out of obligation, Saul relents.

Back at home, Walt finds Skyler, frightened of her husband. Walt tells her that he knows of what happened with Ted, and that he forgives her before hugging his fearful wife...

"You know how they say it's been a pleasure? It hasn't."