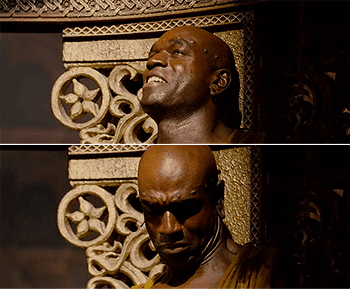 Usually happens in an action scene—bullets and blades flying every which way—chaos and mayhem dominate. At either a lull in the fighting, or the final victory of one side (usually the heroes), we see one of the characters standing fairly still, looking pale. Then something about the scene changes. Either the camera pans to reveal a gaping hole that really shouldn't be there, or essential parts of the character drop off. They don't have to die instantly, but the wound has to be lethal, and revealed.

The heroic version tends to be used in works where Anyone Can Die, and played for tragedy. The villainous version tends to be either a) the loved one of the Big Bad, so they go berserk—which usually humanises colder villains, or b) a major villain has been killed, most often The Dragon or the Big Bad, bringing that arc to a close, sometimes unexpectedly early. Mooks are too small fry to waste serious stage directions on.

May arrive after a Gory Discretion Shot, as a sort of Subversion though this is by no means necessary. More often there's no clue given that anyone on the team that thinks they won is hurt beforehand. May very well be used in an example of Not Quite Saved Enough.

See also Gun Struggle, Bullet Holes and Revelations, and Diagonal Cut. Some forms of Robotic Reveal subvert this trope—the robot, of course, does not die from their 'mortal' wound.

Compare Almost Dead Guy, Secret Stab Wound, After-Action Healing Drama, Agonizing Stomach Wound, Belated Injury Realization, Zombie Infectee (where the injured party deliberately hides that they've received a wound, rather than the author/director hiding it from the audience), and Game-Breaking Injury (where it's specifically the Hero who receives a significant—though not necessarily mortal—wound).

Non-lethal examples will usually go under either Secret Stab Wound or Game-Breaking Injury, or if they really don't fit either of those tropes for some reason, go here as a Playing With of some kind, invoking either No One Could Survive That!, or No One Should Survive That!. May result in the dying character doing The Dying Walk. Sometimes foreshadowed by I'm Cold... So Cold....

This is a Death Trope so Unmarked Spoilers follow. You have been warned!