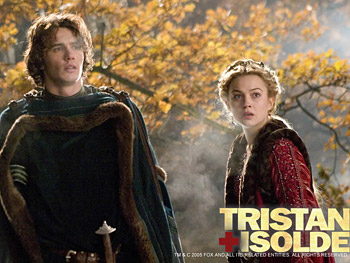 "Before Romeo and Juliet, there was..."
Advertisement:

The 2006 film based on the legend of Tristan and Iseult. It stars James Franco and Sophia Myles as the eponymous lovers of the title; they fell in love after Tristan is left for dead and the Irish princess Isolde and her nurse tend to his wounds, causing the affection between Tristan and Isolde to grow, but things turn sour when Isolde (who is deeply in love with Tristan) learns she is instead to be betrothed to his uncle Marke. The film also attempts to be as realistic as possible for the setting, one example being that there is no mention of King Arthur, who usually is present, at least in the background, of most of the adaptations of the legend.