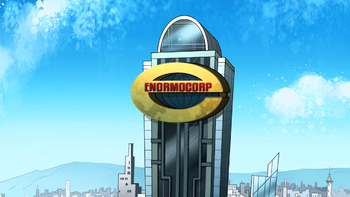 Enormocorp. A corporation that specializes in the enormous.
Advertisement:

So you live in Everytown, America, huh? What school did you go to? Oh, Central Community College, huh? You work at Office Plaza now? Great! I hope you make it to the top!

If your setting takes place in a nondescript town, city, or other location, your production may not be important enough to require specific details for that location, building, or company, such as using the name of a famous enterpeneur, a unique, grand sounding name, or a name that ties it to the state or city. So what do you do? Well... one standby is to give them one that makes them sound important at first glance, but may actually be just as generic as the city itself, if its name wasn't given before; the Mathematician's Answer of a business name.

Other times, the name and/or the exact venture the business performs may not be described, just that they perform business (e.g.: "Business, Inc."), or the business may not have a unique trait (e.g.: a restaurant with a gimmick or offering flame-broiled burgers with a specific spice or recipe, a college that has been esteemed as providing the best education in the world, a bank that is lenient on account holders, etc.).

Related to Bland-Name Product, No Name Given, Everyone Calls Him "Barkeep", Exactly What It Says on the Tin, Acme Products, and Trope Co.. For the superhero version, see Evil, Inc.. May cross over with Where the Hell Is Springfield?, if the business takes place in a city that is also nondescript. Employees of the Business of Generic Importance may have an Obliquely Obfuscated Occupation.