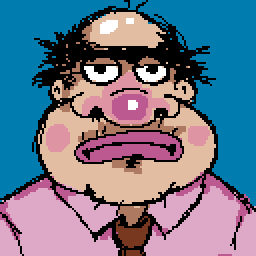 The man himself!
Advertisement:

Clarence's Big Chance is a platformer made by Pseudolonewolf of Fig Hunter games. In it, you play as an ugly 35-year-old virgin who lives with his parents. However, recently, through an online dating site, he found a girl willing to date him! This is his titular "big chance", and he can't afford to mess it up. The game revolves around Clarence going through humorously over-the-top adventures to accomplish everyday tasks, such as getting dressed and going to work. Interestingly, though there are lots of things to do and each area is quite large, most of it is optional, and can be sped through quickly if the player so desires. However, how much you explore and what items you obtain heavily influence the outcome of Clarence's date.

The game is split into four main areas; Clarence's house, where he must prepare for the day and find the front door keys to get out; the suburbs, where he must travel to work; the workplace, where, depending on how many tasks he does, Clarence can be either promoted or fired; the city streets at night, where Clarence must buy gifts for his girlfriend; and finally the date itself, which consists of a long Dialogue Tree revolving around impressing Clarence's girlfriend. Depending on how well you perform, you will receive one of five endings.

Unlike Pseudolonewolf's other works, there is little in the way of actual plot development, and more of a focus on over-the-top comedy and humour. Expect near-constant Lampshade Hanging of typical platformer conventions and the absurd situations of the game itself.

As of late, Psuedolonewolf has been working on an RPG sequel, which seems to be very comical in nature, to this called "Clarence RPG: Clarence's Unsurprising Marital Problems." The sequel features Clarence and his wife, whose name is now officially Sally, and takes place chronologically after the Best Ending of Clarence's Big Chance. The game is meant to be non-violent: while the battles use the same mechanical concepts - hit points, skills that deal damage, turns, etc - bloodshed and spell flinging aren't there. Instead, the battles represent "social interactions". Rather than having HP, characters would have 'willpower' instead, and rather than having elemental skills like fire, water, etc, each skill would have an emotional 'flavour' like 'happy', 'angry', 'friendly', 'disgusting', and so on. Characters and enemies would have weaknesses and resistances to these like creatures do to elements in MARDEK.