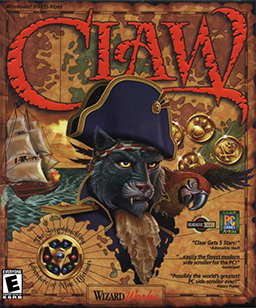 Claw (also known as Captain Claw) is a 1997 PC platformer published by Monolith Productions. It tells the story of a certain cat pirate captain, named Nathaniel Joseph Claw and his quest to find the parts of the Amulet of Nine Lives. While the plot is mostly an excuse, the story gets interesting due to the characters in it, particularly Claw, whose snarky comments make it pretty obvious who you are dealing with.

The game was generally well received, being notable for its gorgeous looking graphics, great atmosphere and fun gameplay. Some even compared it to other great titles like Mario Bros. or Crash Bandicoot. It had quite a few hand-drawn cutscenes (about 18 minutes in total), giving it a movie-esque feeling. It's also worth noticing that it's HARD AS HELL.

The game can no longer be bought, but it can be obtained through other ways. Because it has a level editor, its fan base is still active even to this day, creating new levels and new challenges.

You can read more about it here.