Throw a Barrel at It 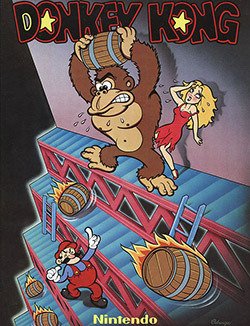 The use of barrels or other large cylindrical objects as thrown weapons. Sometimes these are filled with volatile liquids. Barrels are rather heavy to the average person and can weigh hundreds of pounds when filled. The act of picking them up and throwing them to cause damage is generally left to stronger characters, characters with special equipment or powers, and gorillas.

Typically this trope is implemented in video games. Mooks or bosses might throw barrels at the player's character. Quite often, the thrown barrels can be destroyed before they reach the character by shooting at them. Players' characters themselves may be able to utilize barrels if they fall into one of the categories listed above.

The Trope Codifier is Donkey Kong, and a good number of the examples are homages to that game.