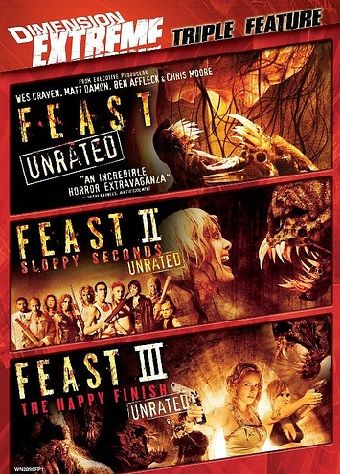 Feast is a horror trilogy that is a result of the first film being a part of the third season of the Project Greenlight contest. The winning team was composed of writers Marcus Dunstan and Patrick Melton and director John Gulager. It was executive produced by Ben Affleck, Matt Damon, Chris Moore (through their Live Planet production company), Wes Craven and the Maloof family. John Gulager would go on and take control over the film series.

The series is notable for setting itself up and marketing itself as a parodic comedy, then taking a turn for the horrifying.

In a remote bar, customers are advised by a newcomer to seal the place since hungry monsters will attack them in a couple of minutes. Due to the events that happen immediately after this warning, the clients organize a strategy to defend the place under siege of deadly monsters.

Throughout the film, almost none of the characters refer to each other by their actual names. They are each identified to the audience by a nickname when he or she first speaks or otherwise becomes the focus of attention. This is accomplished by momentarily freezing the current frame to display the nickname as well as other helpful information, such as their chance of survival.

The film is set in a nearby town immediately after the events of the first film. The monsters have made it into a small neighboring town in the middle of nowhere and the locals have to band with the survivors of the bar slaughter to figure out how to survive.

Picking up moments after the end of Feast 2: Sloppy Seconds, Honey Pie is killed by a creature and the other survivors are saved by the mysterious prophet, Short Bus Gus, who seemingly has the ability to control the monsters. He leads them into the sewers as they travel to the big city. Along the way they get help from karate expert Jean-Claude Seagal and learn that the monsters originate from a place called the Hive. Armed with this knowledge, they decide to fight back and destroy the monsters once and for all