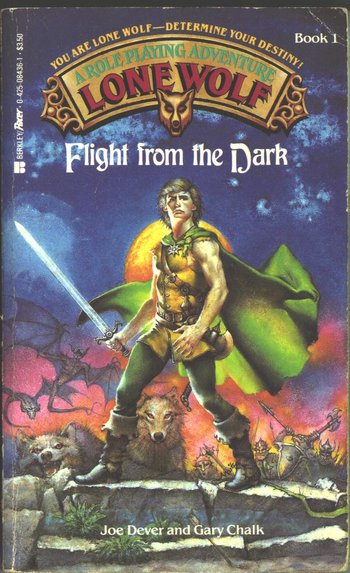 You are Lone Wolf. In a devastating attack, the Darklords have destroyed the monastery where you were learning the skills of the Kai Lords. You are the sole survivor.
Advertisement:

The Lone Wolf Gamebooks series (plural, containing the Kai, Magnakai, Grand Master, and New Order series) were written by Joe Dever; the first book came out in 1984. As the opening quote tells us, the hero is the Sole Survivor Fighter/Ranger/Psionic Knight Lone Wolf, who escapes the Big Bad's destruction of the monastery where he and the rest of the Kai Order lived. In the course of his many adventures, Lone Wolf has to avenge his fallen brethren, foil the Darklords and other Evil Overlords, try to rebuild the Kai Order, and otherwise save his Sword and Sorcery world Magnamund many, many times.

The books take many RPG elements and incorporate them into playing/reading, such as Hit Points (called Endurance points), "Combat Skill", skills (Kai / Magnakai / Grand Master Disciplines), and an inventory system. Each book can be read as a standalone adventure, but finishing a book allows one to gain an extra Discipline and carry over most (usually) of his inventory. You can cheat, but you can cheat at Solitaire too.

There are 20 books out that follow Lone Wolf himself, then 8 after that following a student of his, with more being written. There's also a four-books World of Lone Wolf spin-off (most often just called Grey Star) written by Ian Page and edited by Dever. It takes place in the same world, with Grey Star the Wizard as the hero. There are also 12 Legends of Lone Wolf novelizations roughly covering the first 8 books, fleshing out characterization and the series mythology, as well as a Magnamund Companion guidebook. Another Spin-Off called the Autumn Snow series, written by Martin Charbonneau and edited by Dever, started to be published in 2016. It followed the adventure of Autumn Snow, a novice of Lone Wolf's New Kai Order. There are even two Tabletop RPG versions of the books and a graphic novel spin-off, The Skull of Agarash (situated between the Magnakai and Grand Master series). A videogame spin off was released on Android and iOS in late 2013 and ported to PC in November of 2014. A tabletop RPG entitled Lone Wolf Adventure Game produced by Cubicle 7 and Joe Dever (before his untimely death) has been produced thanks to Kickstarter.

The author passed away suddenly in late 2016, leaving the future of the property, including the remainder of the last wave of books he'd started, up in the air. His son Ben later announced that he and his family will work on the final books, which (along with deluxe hardcover versions of the others) are sold here

Books in the Series
World of Lone Wolfnote A Spin-Off written by Ian Page, edited by Joe Dever.

The Final Fournote Lone Wolf Books 29-32, a continuation of the New Order, after being a victim of Development Hell for years are now due to be published over the next few years. Joe Dever's passing on November 29th, 2016 left the series' future unknown for a while, but his son later announced his intent to publish the remaining books.

Legends of Lone Wolfnote A series of novels by John Grant (the nom de plume of Paul Barnett).

All the currently published gamebooks and a few of the others can, with the permission of Dever, be played online at Project Aon

Not to be confused with the famous Lone Wolf and Cub manga series, which has no connection.

Lone Wolf and its spin-offs provide examples of:

open/close all folders
Tropes A to B
Tropes C to E
Tropes F to L
Tropes M to R
Tropes S to Z
You are dead. Your life and your quest end here.