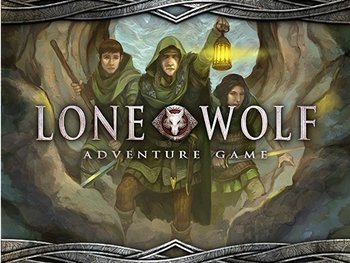 What do you do next?
“You race through the tangled forest, chased by a mob of vicious Giaks. Somewhere in the distance a pack of Doomwolves howls. Up ahead you can hear the roar of the waterfall, cutting off your path."

Lone Wolf Adventure Game is a Tabletop Game produced by Cubicle 7 and Joe Dever (prior to the latter's untimely death). Originally crowdfunded on Kickstarter, the game is a RPG spin off of the Lone Wolf gamebooks, allowing a group of players to have adventures as Kai Lords of the original Kai order. The game takes place about 50 years prior to the Massacre of the Kai and the events of Flight From The Dark.

The base game comes in a boxed set, including tokens, booklets containing the rules, information on some of the game setting, and two pre-made adventures. The system should be immediately familiar to fans of the Gamebooks as it is heavily based on said books. In fact, the game comes with two complexity levels: the base one is pretty much the rules of the gamebooks, while the "Master" level rules include some more advanced rules allowing a greater degree of customization and complexity. The base set only allows players to play as Kai Lords, though the supplement Heroes of Magnamund includes dozens of other character options familiar to fans of the series like Brother of the Crystal Star, Kalte Barbarian, Buccaneer of Shadaki, Dessi Magi or Vakeros Warrior-Mage. Other supplements include other adventures, more monsters for the players to face, and expanded information on Magnamund and its countries.