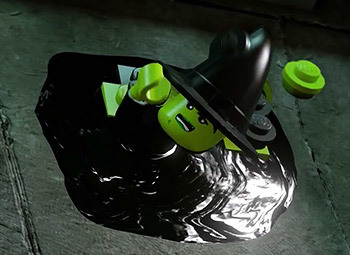 "You cursed brat! I'm melting! MELTING! Oh, what a world, what a world! Make sure to cancel my newspaper delivery...!"
Advertisement:

Maybe you ran out of time to fix the killer poison. Maybe you're made of paint or something. Maybe someone froze you and then heated you up really fast. Or, maybe you opened the Ark of the Covenant. Maybe you fell into lava or acid or something else that makes people melt. Point is, you're about to learn how a snowman feels in the spring.

I'm Melting is when a character or other life form, for one reason or another, has a literal meltdown. It might look like:

This is a common fate of enemies weak to water, sunlight, salt, certain poisons/acids, and of course, deconstructive nanobots.

Note that this can be a subtrope of No Body Left Behind and Everything Fades, although it can lead to Empty Piles of Clothing in works where Shapeshifting Excludes Clothing. It can also be played for comedic effect, with the victim restored to normal in the next scene. A subtrope of this is Lustful Melt. When the character in question doesn't die and is played for laughs, it's Harmless Liquefaction.

Due to the fact in fiction people often say this when they are melting (often as a Stock Shout-Out to The Wizard of Oz), this could be considered an example of Captain Obvious.

As a Death Trope, there may be some unmarked spoilers here. Be careful!