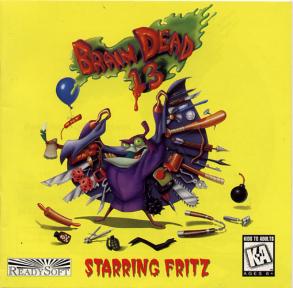 Don’t worry. Fritz will make sure to use all of those... on YOU!
"If it's a challenge you want, then it's a deadly game you'll get! We shall see just who is 'average'!"
— Dr. Neurosis in the intro.
Advertisement:

An interactive movie game similar to Dragon's Lair and Space Ace, created and published by ReadySoft for MS-DOS in late 1995. As in those games, you have to input commands at the right time during the movie or face sudden death, and have to retry. Compared to Dragon's Lair, Brain Dead 13 gives the player slightly more time to make decisions and actually tells you when you entered a wrong command (instead of killing you, as Dragon's Lair does), but there's much less of an idea of what you're supposed to do and when (and some of the inputs are downright counterintuitive). Combine that with Everything Trying to Kill You and you've got yourself a challenge.

You star as computer fixit Lance Galahad, who is hired on a routine repair job to the creepy old castle just outside town, but discovers that he's been tricked into fixing the computer of Mad Scientist Dr. Nero Neurosis, who now plans on using his master server to take over the world. Unfortunately for Lance, he makes the mistake of pointing out how cliche Neurosis' plot is, which, of course, doesn't exactly go over well. Lance finds himself on the run from the doctor's psychotic henchman, Fritz, and now has to find his way through the oddly large castle, fight the various other villains who live there, make it back to Neurosis' computer and shut it down, taking out Neurosis for good.

The game features several unique, vibrant areas and characters, including the seductive but sadistic Vivi, who has the intent of giving you the best, and last, makeover you'll ever have, and Moose, the Frankenstein's Monster with the brain of a mindless jock. The areas are interesting but challenging, since standing still at any point will leave you dead faster than you can blink.

Failing to dodge a book-throwing monster's projectile in the library will have Lance get a book chucked down his gullet. It says something when this is one of the LEAST gruesome ways to die that this game offers.

Failing to dodge a book-throwing monster's projectile in the library will have Lance get a book chucked down his gullet. It says something when this is one of the LEAST gruesome ways to die that this game offers.