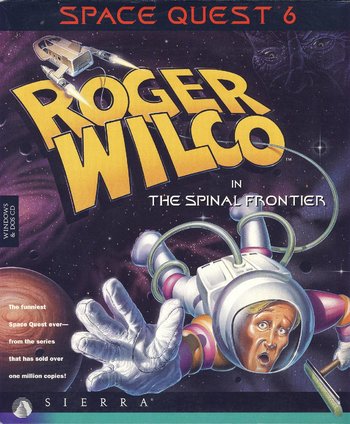 So this is how it ends. Not with a bang, but a squeegee.
Space Quest VI: Roger Wilco in the Spinal Frontier (also simply known as Space Quest VI) is the sixth and last game in the Space Quest series, released in 1995. Roger Wilco returns to Starcon headquarters after defeating the Pukoid mutants in the last game. However, for his recklessness and breaking Starcon regulations, he is demoted back to a second class janitor and is relocated on the SCS DeepShip 86. As he settles into his new surroundings, he is pursued by a new villain named Sharpei, who is connected to a secret project that may prolong life indefinitely using nanomachines.
Advertisement:

Initially headed by Josh Mandel with Scott Murphy acting as a creative consultant, it was the last game Mandel worked on for Sierra, having left the company midway through development after a contract dispute with Sierra's higher-ups.