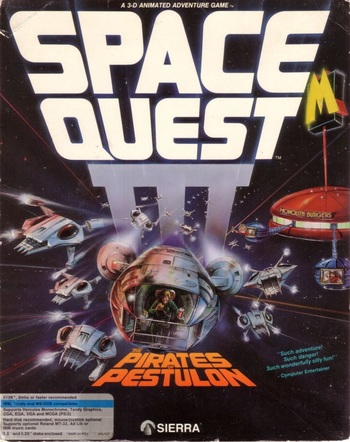 Annihilator droids, overpriced space fast food and an evil software developer. Just another ordinary adventure for our Roger.
Space Quest III: The Pirates of Pestulon (also simply known as Space Quest III) is the third game in the Space Quest series, released in 1989. Taking place immediately after Space Quest II, Roger Wilco's escape pod is captured by a garbage freighter. As he manages to escape it with an abandoned ship, he'll discover that he's being hunted down by an android for not paying for a whistle in the previous game. Moreover, he finds another sinister company known as ScumSoft, who are creating mediocre games by unethical means.