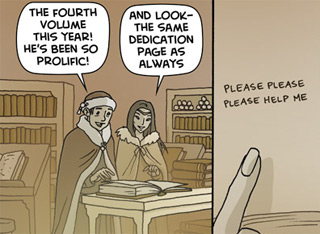 You'd think they'd have gotten the hint by now.
"Send help! I'm trapped in a bottle factory! Right next door to the fortune-cookie place!"
— Description for the Message in a Bottle, Wario Land: Shake It!
Advertisement:

Someone is trapped, or forced to work against their will, in some kind of facility that produces publicly available goods (such as fortune cookie fortunes, or candybar wrappings). They proceeds to use them as a means of communicating with the outside world and asking for help.

In comedic versions, it's usually just a throwaway gag, and the fate of the mysterious victim isn't ever mentioned. And whether it's played for laughs or drama, it's a subtrope of Distress Call.

Compare with Quiet Cry for Help. Not to be confused with: I'm trapped here, and Trope Co. is forcing me to type up trope entries! Send help!