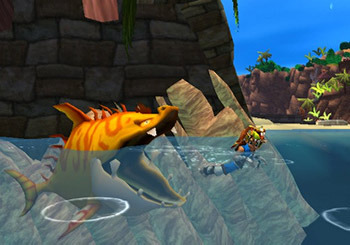 Samos said not to swim to the island.
"It is pitch black. You are likely to be eaten by a Grue."
— Zork
Advertisement:

The Border Patrol is a monster or other hazard introduced specifically to provide an in-universe reason for why the player isn't allowed to wander too far off the game map without resorting to an immersion-breaking Invisible Wallnote There probably is an invisible wall, it's just too far out to reach before the Border Patrol stops you or Insurmountable Waist-Height Fence. This often takes the form of an Invincible Minor Minion that you have to run away from, or an obvious environmental hazard that you can't survive. Sometimes this will be an Instakill Mook. Sometimes the Border Patrol monster can actually be killed, though it's just as likely to respawn if the game designers anticipated your violent yearning to be free. When done well, the player is deterred by the dangerous thing and returns to the field of play. When done badly, the player character is unavoidably killed by the whatever, with no explanation as to what they did wrong or why they were just killed.

Since it's fairly common to have game maps be surrounded by water, and border patrols generally have to be able to pop into existence anywhere at a moment's notice, big aquatic predators that emerge from the deep to gobble you whole are a very common way to do this — sharks in particular are very common, as are more generic Sea Monsters. Another common form of this trope is a barrage of missile or gunfire that keeps up until you're dead or back in the play area.

Can be Nightmare Fuel if unexpected (or even when it is expected). If it returns you to a particular location when it catches you, it's also a Mook Bouncer.

Naturally, savvy (and glitch-happy) gamers just love figuring out how to get around these.

See also Beef Gate and Broken Bridge where you are expected to be able to bypass the monster or obstacle, but not right away. Compare Boundareefs, where the monster is replaced by an impenetrable line of rocks. Related to Drop-In Nemesis. Not to be confused with members of the US Customs and Border Protection Agency, although they can technically count...

If the player attemps to swim into the ocean, leeches will start to swarm Gordon Freeman on sight and bite him to death in several seconds if the he doesn't get out of the water.

If the player attemps to swim into the ocean, leeches will start to swarm Gordon Freeman on sight and bite him to death in several seconds if the he doesn't get out of the water.