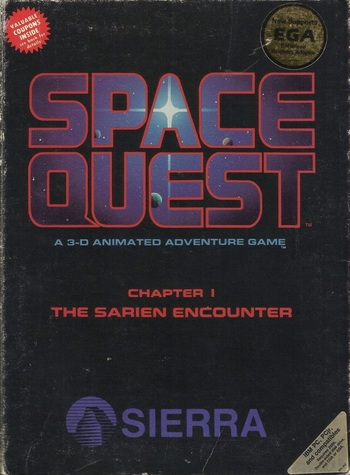 A janitor's adventure begins.
"You serve as a member of the crew of the Arcada as a janitor."
"That's right, a janitor. And not a very good one."
— Opening Scroll
Advertisement:

Space Quest: Chapter I – The Sarien Encounter (also simply known as Space Quest 1) is the first game in the Space Quest series. It was released in 1986 and followed a lot of the same gameplay formulas as the first two King's Quest games, but in space! It's not the hardest sci-fi, but it's still epic in scope when it comes to space travel and a variety of alien creatures.

You play as hapless janitor Roger Wilco, who discovers that the vessel he's on, the Arcada, has been overrun by the Sariens, who plan to use the ship's star generator to destroy the planet Xenon. Roger must find a way off the Arcada, recuperate for a while on an alien planet, and get up to the Sariens' mothership to foil their plot.

There was a remake with a new interface, updated graphics, and sound effects in the style of Space Quest IV released in 1991 by Sierra.