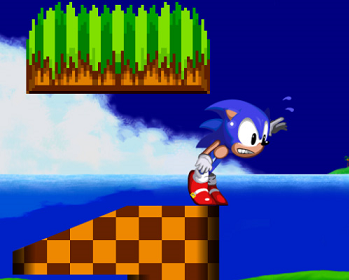 Early video game designers figured that if a player walked toward the edge of, say, a cliff, it was only reasonable that if they kept going when they got there, they'd fall off (typically to an untimely death). This sounds reasonable enough and makes sense.

It's not as easy as it looks. Reasonable though it may seem, it's actually very very hard to step off of an edge. It's something that the human body has an autonomic aversion to doing, as it requires moving your center of gravity out in front of your feet. Which means that it is, in fact, unrealistic for it to be trivially easy to walk off a cliff.

Edge Gravity is the property of the edge of a platform to actively resist the player's motion over it.

Edge Gravity can be implemented as simply as having the motion of a player character halt momentarily when an edge is reached; it may be indicated by having the character teeter on the edge. Games which use analogue controls may require that the player extend their control to maximum to cross the edge, or even press the "jump" button (reflecting that while you might want to jump off, or climb down, you're unlikely to want to step off the edge). Alternatively, a game may let the player go straight off the edge, but automatically spin around and hang from it. Or, to make absolutely sure, it could flat out slap an Invisible Wall in front of them.

Early Sierra Adventure Games were notorious for their lack of Edge Gravity (and for being condescending toward any player who fell victim to a steep drop). Avoiding such drops was often difficult because of the camera angles and difficulty of depth perception in a 2D game with 16 colours.

These are most commonly found in third-person 3D Platformers. First Person Shooters and 2D Platformers generally don't, though Donkey Kong Country is an interesting exception.

2D Platformers can generally simulate the effect with careful level design. Some kind of harmless obstacle is placed in front of important edges. This means that a careless (or extremely fast) hero won't walk into a Bottomless Pit or take a Leap of Faith without the player meaning to. Edges that aren't so important (because falling has no serious consequence) can thus be navigated at full speed with no cost to the player, making for a smoother playing experience.

If the Edge Gravity is unreliable, it can be a form of Fake Difficulty, and if it's so powerful as to be impossible to overcome, it can work as an Insurmountable Waist-Height Fence. Some games pair this with Bottomless Pit Rescue Service.

If this happens while not on a platform edge, you just hit an Invisible Wall instead.