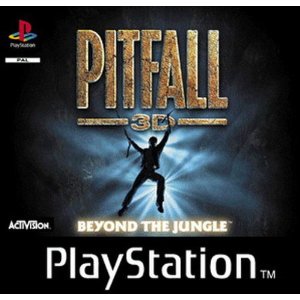 Beyond the Jungle is the fifth game in the Pitfall! series, and (as implied by the title) the first one in 3D. It was released on PlayStation and Gameboy Color.

While investigating a cave in Mexico, Pitfall Harry Jr. (voiced by Bruce Campbell) finds a crystal which opens a rift into another dimension. In the rift, a woman named Mira appears and tells him that she's a member of ancient civilization of Moku, and her world has been taken over by evil woman known as Scourge (voiced by Tom Kane). Harry Jr. agrees to help her cause and takes a step into the rift.