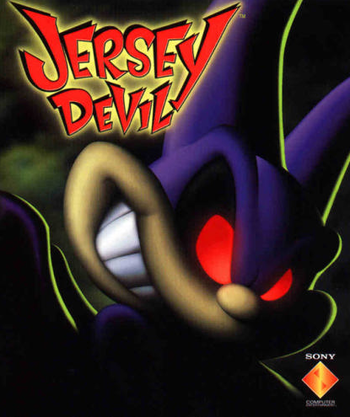 Jersey Devil is a 3D Platform Game, developed by Behaviour Interactive and released for the PlayStation in 1997 and for PC in 1999.
Advertisement:

Its animated opening shows pumpkin-headed Dennis deliver the infant Devil in a cage to his master, the resident Mad Scientist Dr. Knarf. The latter is initially annoyed as he was just about to dissect a helpless anthropomorphic eggplant, but soon decides that cutting a cute Devil into "teeny weeny little pieces" is even better! Luckily, our Devil manages to both escape his clutches and wreck the lab with a poorly stored bottle of nitroglycerin, the resultant explosion knocking the Devil all the way into Jersey.

Many years have passed, and Dr. Knarf finally recovered from the damage inflicted on his lab, and was able to finish his experiment to create an army of mutant plants to kidnap Jersey's residents. However, the Devil has now grown up into a defender of Jersey, and is there to rescue the citizens and thwart Knarf's plans.