Video Game / Broken Sword: The Shadow of the Templars 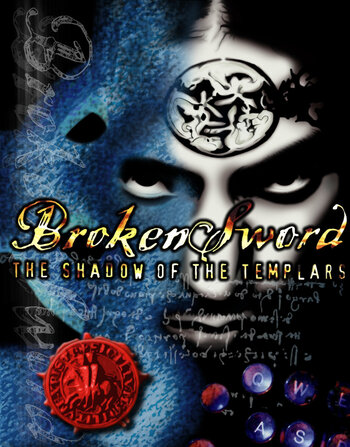 "As I picked myself up, all I could hear was the ceaseless drone of traffic. Life went on around me, but the explosion was to change my life forever..."
— George Stobbart
Advertisement:

Broken Sword: The Shadow of the Templars is a 1996 adventure game created by British developer Revolution Software, and the first game in the Broken Sword series. In the United States, it was re-named Circle of Blood, which was reverted back for the sequels and the updated re-release.

The game follows George Stobbart, an American tourist in Paris who survives the fatal explosion caused by a mysterious clown and attempts to arrest the killer. His pursuit leads him to various regions of Europe and the Middle East, until he finally unravels a certain conspiracy that ties to the Knights Templar, the Catholic order that was supposed to cease to exist back in the 14th century...

In 2009, Revolution Software released an enhanced remake (dubbed The Director's Cut) for the PC, Nintendo DS, and iOS.

Alternative Title(s): The Shadow Of The Templars