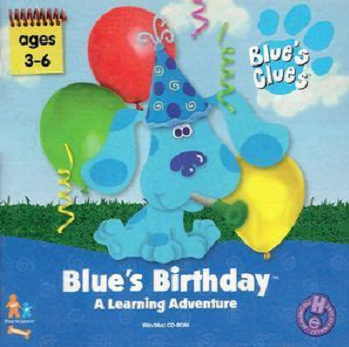 Blue's Birthday Adventure is a 1998 Point-and-Click children's game based on Nick Jr.'s Blue's Clues, developed and published by Humongous Entertainment for PC and macOS.
Advertisement:

The plot is somewhat a Adaptation Expansion of the episode "Blue's Birthday", but expanded onto four games. Each game deals on playing the game Blue's Clues and figure out what Blue wants to do at her party (eg. what she wants to eat, what game she would like to play, ect.) In short, it's a interactive version of the show, but with the typical point and click adventure touch.

This game is not available with the other titles from Humongous on Steam due to licensing issues, though physical copies are cheaply available online.