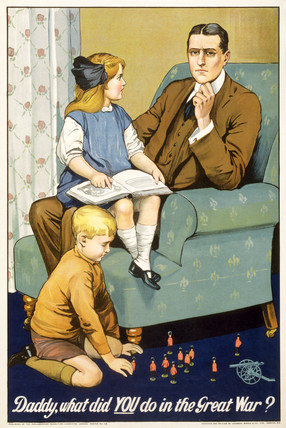 Quite often, especially in shows set in The '50s and The '60s, the father figure will be a veteran. Whether he's a Standard '50s Father or an Overprotective Dad, he's capable of being a real hardcase in the right circumstances. Yes, even the Dads who appear to be nothing but creampuff can be tough guys when they need to be, and he bases it all on his years of military service.

Often this is pulled in situations where a younger (almost always male) character needs to be browbeaten or intimidated. Whether the dad was merely a Marine, or the equivalent of FOXHOUND, at some point, they'll bring it up in a not-so-casual way when they need to remind the younger character that they aren't as soft and yielding as they seem to be.

Quite a few female characters are given a Veteran Dad as an excuse for why she's tough and independent, but it can also be a Freudian Excuse if he was a tyrannical martinet who lorded over his family with an iron hand. Sometimes this allows female characters to have access to unusual skills or assets, on the assumption that senior military officers use their aviation regiments as their kid's private chauffeurs.

This effect can also happen if Dad used to be a cop, or a government agent of some sort. In comedies, it often turns out that yeah, Dad was in the Army... but he was a cook, or a file clerk, or a mechanic, or had some other less than intimidating job.note This is actually the far more likely scenario. There is the Tooth-to-tail ratio

concept, which is the ratio between people in active combat, and their support personnel, and the latter is usually the overwhelming majority in the US. In the Vietnam War for example, someone who served in the US Army would be nearly 13 times as likely to be primarily non-combat personnel. See: Easy Logistics.

This was a Justified Trope not too long ago for American families, given the almost back-to-back nature of World War I, World War II, The Korean War, and The Vietnam War. Sometimes a fictitious Great Offscreen War is used when the parental characters would have been too young (or hadn't been born yet) to have participated in any of the aforementioned wars, depending on the current Present Day. Given the ongoing War on Terror, one can expect this trope to come back into prominence. It shows up quite often when the plotline involves The Generation Gap.

Wilhelm Schramm, who was a fanatical military prosecutor for the Wehrmacht during the war, teaches his children about 'strength of character'.

Wilhelm Schramm, who was a fanatical military prosecutor for the Wehrmacht during the war, teaches his children about 'strength of character'.