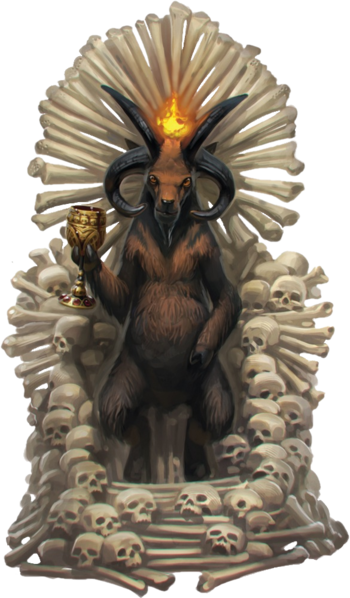 "Please allow me to introduce myself, I'm a goat of wealth and taste."
Advertisement:

Caprines such as goats and sheep are commonly portrayed as either adorable little lambs or all-consuming extreme omnivores. And then there's these guys.

There's something a little unsettling about fully-grown goats and rams. Their long curved horns remind us of typical portrayals of Satan. Their rectangular, horizontal pupils are a good way to invoke the Uncanny Valley.note Other grazing mammals like horses and cows have these kinds of pupils too, but they're not as obvious as goat pupils. The tuft of hair on a goat's chin resembles a Beard of Evil. For this reason, it is common to portray goats and rams as scary, aggressive, or monstrous Xenophobic Herbivores in fiction.

Goats are often explicitly tied to satanic themes and demonology, as various demons — most notably Baphomet and Satan himself — have traditionally been depicted as wholly or partly caprine in appearance; Big Red Devils often have goatish horns — or even entirely caprine heads — and hooves, as well as goatees, as part of their demonic appearance.

Compare Brutish Bulls for other negative portrayals of bovids, Hellish Horse for the similar connotations of equines, and Extreme Omni-Goat for the stereotype of goats as Extreme Omnivores. For goat- or ram-like humanoids, see Fauns and Satyrs, who may be portrayed as benign or as aggressive and demonic. Contrast Sweet Sheep for positive portrayals of sheep and rams.