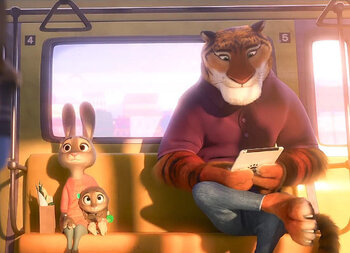 Oftentimes, fiction will portray plant-eating species as being rather friendly, but many more recent works have taken to subverting that trope and depicting intelligent herbivores as irrationally xenophobic, particularly towards intelligent carnivores and omnivores. In these settings, humanity is usually absent and replaced with a World of Funny Animals. However, should humanity still be present, it is very likely that it will be considered a predator species by these herbivores, and dealt with accordingly. Some such treatments happen to elephants, rhinoceroses, hippopotamuses and formerly gorillas, whose their great power and tremendous size make them dangerous to most smaller predatory animals.

In real life, herbivores tend to be the prey of something else, so a variety of different species will react to strange things with a strong flight-or-fight response. Relatedly, herbivores that are normally chummy with each other and other plant-eaters may be instinctively afraid of carnivorous and omnivorous species.

In certain situations, these herbivores may outright kill the predatory species and eat their carrion.

The inverse of Herbivores Are Friendly, may or may not appear with Predation Is Natural or Predators Are Mean. Frequently overlaps with Absolute Xenophobe. No direct relation to Evil Vegetarian, despite the similar connotations.

Animal Stampede happens when multiples of Xenophobic Herbivores appear to run over other animals or other objects.