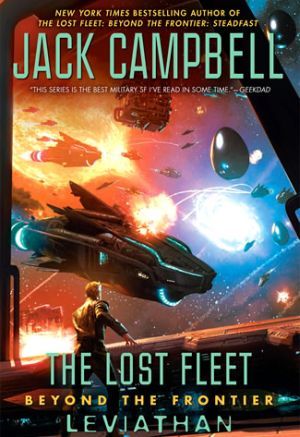 The Lost Fleet is a military science fiction series by Jack Campbell (actual name John G. Hemry). John "Black Jack" Geary of the Alliance Navy is escorting some merchant ships when the convoy is attacked in the first strike by the Syndicate Worlds, or Syndics. He fights a rear guard action, ejecting from his ship at the last moment, but the transmitter of the escape pod is broken, so he isn't found for nearly a century.

When he's awakened, the fleet is preparing to use the enemy hypernet gate network, with a traitor-provided key, to strike at the Syndic home system. It goes wrong. He takes command of the fleet and must use his knowledge of forgotten tactics to save the fleet from certain destruction deep behind enemy lines. The attrition rate of ships and experienced personnel has forced the Alliance to cut down costs and production times and replace traditional officer training with a twisted code of honor that demands attacking the enemy head on.

The only good news, until Geary shows up, is that the Syndics have had to do the same. He also has to defend himself against the treachery and stupidity of dissenting captains, and keep his love interests from killing each other. Also, there seems to be a mysterious race of Aliens behind the ongoing war and the barely-understood technology of the hypernet gates.

Two follow on series continue the store of Captain Geary and the leaders of a particular planet. The first, Beyond the Frontier, follows now Admiral Geary as the fleet investigates the aliens and continues to fight internal forces that threaten it and the Alliance. The second deals with the break-up of the Syndicate Worlds from the perspective of Syndic CEOs Iceni and Drakon, the leaders of Midway as they fight to maintain order (and power) on their planet and nearby worlds.

The completed series is composed of six books:

The second series Beyond the Frontier:

For the P.O.V. Sequel series, see The Lost Stars.
For the prequel series see The Genesis Fleet

The Lost Fleet provides examples of: