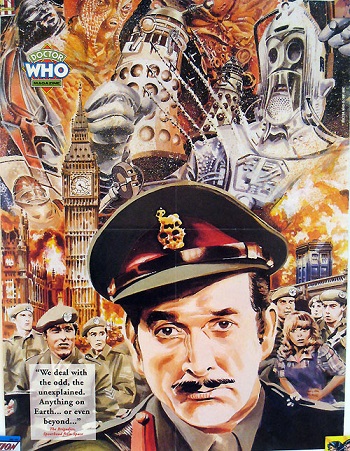 Armour-piercing rounds for Daleks, high-explosive rounds for yetis, and silver rounds for werewolves. (And we even got gold-tipped bullets for you-know-what.)
"This mission is recon only. Do not engage the enemy. I'm allowing the use of this ship because of the obvious tactical advantage it provides you. Under no circumstances is it to be used to travel through time. Never in my life did I imagine ever giving that order."
— Gen. Hammond, Stargate SG-1 ("Moebius, Part 2")
Advertisement:

Any senior military person in a sci-fi drama who is a good guy. Will sometimes be skeptical of the existence of the Monster of the Week. When convinced and facing the current menace, Five Rounds Rapid is usually his default response to deal with it. However, when that fails, he is generally ready to admit when he is wrong and is immediately open to other ways to handle the situation. By senior, we mean someone above the rank of Colonel or naval Captain. Often, The Brigadier is also a Reasonable Authority Figure.

A natural employment for an Officer and a Gentleman. See also: Four-Star Badass. The law-enforcement equivalent is The Commissioner Gordon. Contrast General Ripper, Insane Admiral.

In the rankings of Authority Tropes, the next lower step is Colonel Badass and The Captain. The next steps up are the Four-Star Badass, The Caligula, The Good Chancellor, Evil Chancellor, Standard Royal Court, and Decadent Court.

Note that The Brigadier is not necessarily a Brigadier (as in General), but may have any number of stars.