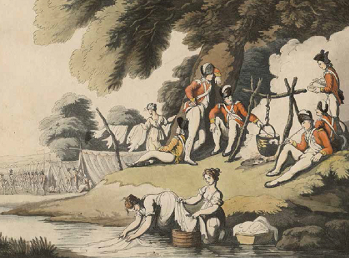 Well, our fathers fought the Second World War
Spent their weekends on the Jersey Shore
Met our mothers at the USO
Asked them to dance, danced with them slow
—Billy Joel, "Allentown" (context

In most wars, you have a bunch of men far from home, who are scared for their lives every day. Camp followers are those people who go with these men, and they originally consisted of the soldiers' wives or mistresses, merchants, and others who serviced and supplied the combatants. Up through the mid-19th century, the vast majority of female camp followers were soldiers' wives, and women of every socioeconomic class accompanied armies, creating a military community. They nursed, sewed, washed, and acted as merchants. Outright prostitution was often restricted or, in some cases, banned — sometimes to maintain good military order and discipline or to maintain the dignity of more "legitimate" camp followers.

Not to be confused with a Groupie, a Fangirl, or a follower who is Camp.