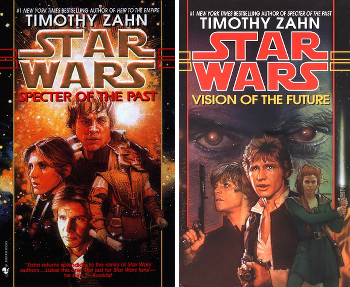 The Hand of Thrawn duology is a pair of books, Specter of the Past

and Vision of the Future

, by Timothy Zahn. Set in the Star Wars Legends, they take place ten years after The Thrawn Trilogy (hence, fifteen years after Return of the Jedi).
Advertisement:

Supreme Commander Pellaeon looks at the Imperial Remnant, the scraps of a once-proud Empire, and concludes that there is one and only one way it may be saved: a peace treaty with the New Republic. But other Imperials are unwilling, and try to sabotage his effort by capturing the messenger Pellaeon is sending. While the Supreme Commander waits for a response, they contrive to make it seem as if Grand Admiral Thrawn has come Back from the Dead.

Jedi Master Luke Skywalker, the head of the New Jedi Order, joins his old friend Han Solo for a diplomatic mission—and in the process helps fight off a gang of pirates. Luke holds back, having decided recently to not be so profligate with his abilities, and notices something he might otherwise not have—he can feel a "distortion" in the Force, which as far as he knows is caused only by clones, aboard the pirates' ships.

And taking a much-needed vacation on Wayland, the world that the Emperor used as a trophy case, Senator Leia Organa Solo and her children run into a smuggler who has stumbled across a cache of datacards, one of them the Caamas document.

The Caamasi people were a group of peaceful Actual Pacifists, so respected by even some warlike species that "caamasi" was a word for "friend from afar" or similar in numerous languages, and there is even a legend that the first Jedi came to the Caamasi to learn ethical use of the Force. Shortly after the Clone Wars, their planet's surface was razed; the few survivors were offworld or didn't see what initiated the Holocaust, but the genocide had long been believed to have been directed by Palpatine. Palpatine's copy of the Caamas document confirms this—but more importantly, notes that a number of Bothans, working for him, helped to lower Caamas's planetary shields, allowing the destruction. Unfortunately, the document Leia has found is corrupted, and the actual list of names is lost. When the news gets out, the New Republic is engulfed by demands for justice — but without knowing who the perpetrators are, for some species the solution is to punish the entire Bothan race, while others consider that unacceptable. The heatedness of the debate, with leaders of entire species coming down on either side, leads to a resurging of old inter-species rivalries, and the New Republic begins to fracture... just as word arrives on Coruscant that Grand Admiral Thrawn has returned.

Before the Caamas crisis rose up, this would have caused the New Republic to react decisively and overwhelm the pathetic fleets still guarding what is left of the Empire, but in the current political climate, there is no consensus on if it is even real. The Imperial conspirators spin their webs larger yet tighter. Luke's clone hunt falls short, and he learns that Mara Jade has vanished on a hunt for a mysterious alien ship that's buzzed her twice. Taking a chance, rather than lending his efforts to the larger danger, he listens to the Force and goes after her. Leia struggles desperately to keep the Republic from collapsing into all-out civil war, and Han mainly works to keep Leia from going crazy. Pellaeon waits, wondering why the New Republic general he's waiting for in an isolated area of space hasn't responded, and utterly annihilates the fleet the conspirators send after him.

That's set up early in the first book. Just another few weeks in the galaxy.

In addition to the character and universe tropes they carry over from the Original Trilogy, these books provide examples of: