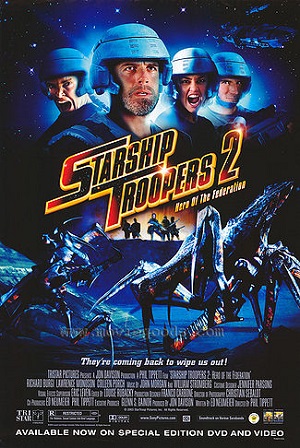 Starship Troopers 2: Hero of the Federation (2004) is the first of two Direct to Video sequels to Paul Verhoeven's 1997 version of Starship Troopers. Unlike the first film's epic Military Science Fiction story, this is more of a contained Sci-Fi Horror.

After a disastrous engagement on a Bug world, a group of Mobile Infantry soldiers flee to a deserted Federation outpost, finding only a few custodians and a disgraced soldier in lock-up. They reactivate the electrified defense perimeter, buying them some time for a rescue ship to arrive. It soon becomes clear that the Bugs have infiltrated the place in the form of Puppeteer Parasites and plan to take over the Federation's central command.