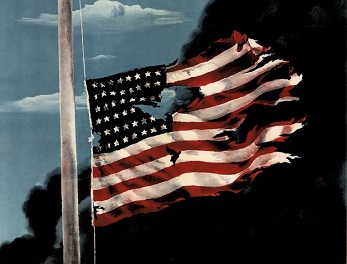 These atrocities rend my heart and fuel my anger. Erathia's banner must be respected— never disgraced.
— Catherine Ironfist, finding a tattered Erathian flag in the ruins of a town, Heroes of Might and Magic III
Advertisement:

Normally a flag flies proudly on the breeze as a declaration of the power and authority of its nation. To be fit for display, a flag should be intact and untarnished, and if it is not it is generally ceremonially destroyed. Sometimes, however, a flag will be displayed that is dirty, full of holes, or reduced to ribbons. When this occurs, it generally means either that the flag has been used during a fierce battle, or that the nation it represents has fallen on hard times. Why else would they allow their standard to be shown this way?

Other times they can be used as a sign of defiance or hope. The country, though battered and torn, is still standing and will survive.

They are also commonly found in After the End settings or amidst the ruins of a fallen civilization.

Occasionally, flags like these can be kept and preserved if they are significant in some way, one that was present for a landmark event, for example.

Compare Burning the Flag, for when a flag is being deliberately destroyed.