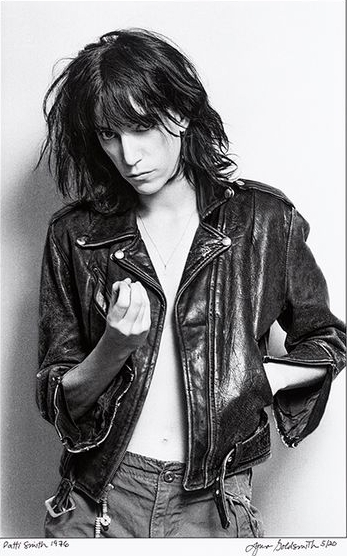 The Godmother of Punk, 1976. Photo by Lynn Goldsmith.
"We created it. Let's take it over."
—Patti Smith, ending her cover of "My Generation"
Advertisement:

Patricia Lee "Patti" Smith (born December 30, 1946) is an American singer-songwriter and published poet who helped form a foundation for the American version of Punk Rock with her ambitious 1975 album Horses. This distinction has to be made here, as on a tour to Britain in 1976, what might otherwise have been a fruitful collaboration was scuppered by Johnny Rotten of the Sex Pistols' sneering on-stage reference to Horses, horses, fucking horses! It had been envisaged that the British and American versions of Punk be brought together with Patti fronting the Pistols in a few covers, but Rotten's clear disdain for what he saw as pretentious twaddle, combined with Smith's reciprocal criticism of the Pistols' lack of basic musical talent, killed that nice sentiment and entrenched the separation between the two schools of Punk.note Two years later, Sex Pistols bass player Sid Vicious, out on bail for the murder of his friend Nancy Spungen, assaulted Patti's brother Todd at a New York club. His bail was revoked and he was hauled back to Rikers Island.

She has many popular songs, including but not limited to "Because the Night," "People Have The Power," "Dancing Barefoot," "Gloria," "Redondo Beach," and "Free Money." "Dancing Barefoot" was covered by U2 and appeared as the B-Side to "When Love Comes to Town", gaining almost as much radio airplay as the A-side.

She has several books out, including some early poetry chapbooks and the monumental Babel from 1978. Her brief 1992 memoir, Woolgathering, is about her childhood mystical experiences, and The Coral Sea from 1996 is a tribute to her lifelong friend and artistic collaborator Robert Mapplethorpe. 2005's Auguries of Innocence is also a poetry collection, including themes of current events and tragedies. In 2010, she won the National Book Award for her memoir Just Kids. A sequel, M Train, appeared in 2015, followed by Year of the Monkey in 2017. Also in 2017, Devotion is about how and why she writes. The New Jerusalem (2018) is a William Blake - like epic prose poem about the relationship between art and faith, illustrated with her art and photos.

She was named a Commander of the Ordre des Arts et des Lettres by the French Ministry of Culture in 2005. She was inducted into the Rock and Roll Hall of Fame in 2007. She received the PEN Literary Service Award in 2020, given to "an important writer whose critically acclaimed work has drawn a wide audience and who helps us to understand the human condition in original and powerful ways." In May 2022, she was awarded the Legion of Honor

, France's highest and most important distinction.

Not to be confused with '80s singer Patty Smyth of Scandal.

"Jesus Died for somebody's tropes but not mine":