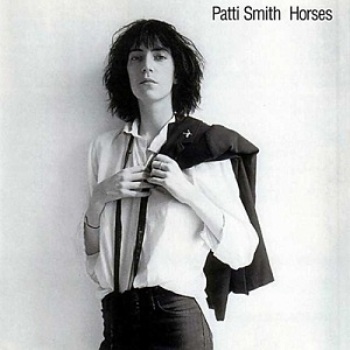 I think it's sad, it's much too bad, that our friends can't be with us today.
"Horses" tore my limbs off and put them back on in a whole different order. I was like: "Shit, yeah, oh my god!" then I threw up."
Michael Stipe, who called "Horses" "just the most important thing in the world."
Advertisement:

Horses is historically important for being an enormous inspiration to the Punk Rock scene that emerged in New York in the late 1970s. The record established Smith as a serious singer-songwriter, whose elegance, artistry, androgyny and strong self assuredness made her an icon to many Punk Rock, Alternative Rock and even Pop artists that would follow in her footsteps, including U2, R.E.M., The Smiths, Morrissey, Madonna, Courtney Love, and Sonic Youth. Since 2009 it has been preserved by the National Recording Registry for being "culturally, historically and aesthetically significant".

The CD version adds "My Generation" as a bonus track.