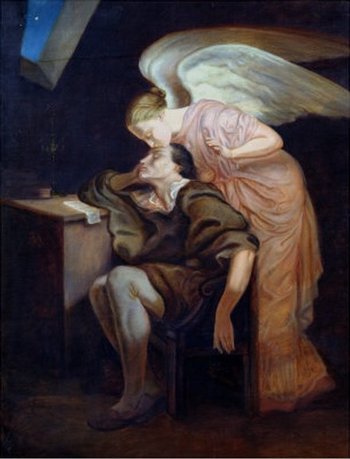 The Kiss of the Muse by Paul Cézanne
"Sing to me now, you Muses who hold the halls of Olympus! You are goddesses, you are everywhere, you know all things—all we hear is the distant ring of glory, we know nothing. Who were the captains of Achaea, who were the kings? The mass of troops, I could never tally, never name, not even if I had ten tongues and ten mouths, a tireless voice and a heart inside me bronze, never unless you Muses of Olympus, daughters of Zeus whose shield is rolling thunder, sing, sing in memory all who gathered under Troy."
— Homer, The Iliad, Book II (translation by Robert Fagles)
Advertisement:

In Greek Mythology, there is a subset of spirits/goddesses under the guidance of Apollo known as muses. These entities exist to seek out creative people and inspire them to create great works of art. In a sense, this posits that all great works of art are linked to the divine and their creators are merely vessels for which divine forces can channel their energy.

This concept is often invoked by many a real life creator by attributing a real life person special to them as their "personal muse." Usually occurs with a female muse for a male creator, but the inverse (or a combination thereof) is not too uncommon. If said woman is an actress, she'll be cast in the main female role in every one of the director's movies, at least until their relationship breaks down.

Of course, art often mirrors life in this regard, and many fictional artists have muses of their own—sometimes, in fact, literal Muses from classical Greek mythology.

"Creative person meets a muse (either one of the nine classical Muses or a more individual muse) and interacts with them, usually by keeping them captive." Neil Gaiman has commented

in his online journal: "I have a fairly good memory, and don't recall ever reading any captive-muse-for-someone-with-writer's-block stories before I wrote mine." This would make Gaiman's story (detailed below) the Trope Codifier, at least for the supernatural version of the trope.

Not incidentally, the same story provides a codifying example of Muse Abuse.

Not to be confused with the British rock band Muse. Or Muse Abuse, although it often follows. See also Manic Pixie Dream Girl. For someone who functions as the opposite and is also the artist's love interest, see Love Makes You Uncreative. When athletes need inspiration, it is often rallied by pom squads.

Examples of muses to fictional artists:

Bonita Soleil is the inner muse of Glorio Von Gouton. Her inner sunshine and the spirit of her youth.

Bonita Soleil is the inner muse of Glorio Von Gouton. Her inner sunshine and the spirit of her youth.