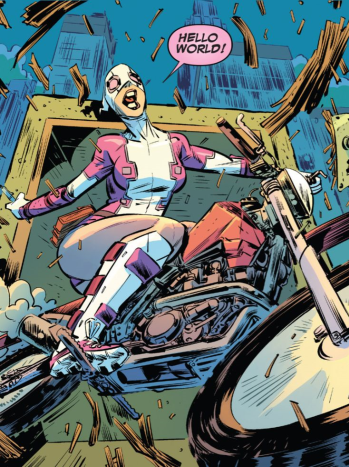 "THANK YOU! FUCK YOU! The star is here!"
— Ladd Russo, Baccano!
Advertisement:

A One-Liner that is powerful, portentous, and delivered by a character to announce his presence. As if we could possibly miss it. Often pronounced quite emphatically. Contractually required for a certain type of actor. Can almost always be replaced by, "Did someone order a LARGE HAM?"

Can be delivered as the character enters, or while he is still offstage as a portent. If the show engages in Lampshade Hanging about the largeness of the ham, this can evoke a response of "Oh no!" from those already in the scene. (See Catchphrase Interruptus).

When the line is uttered by proxy, that's Hammy Herald.

The most common form of dialog found in a World of Ham. Often the response to Inadvertent Entrance Cue. Usually a Catchphrase, but not always. Compare In the Name of the Moon, Big Entrance, Dynamic Entry. The Noblewoman's Laugh frequently ends up being a case of this. Sub-Trope of Establishing Character Moment.

When followed by a heapin' helpin' of ass-whoopin', it's a Pre-Asskicking One-Liner. Not to be confused with Food Fight. If this is combined with Say My Name then it's Large Ham Title.

Any time Gilgamesh shows up, you can be guaranteed that there will be enough ham to feed a city block for a week.