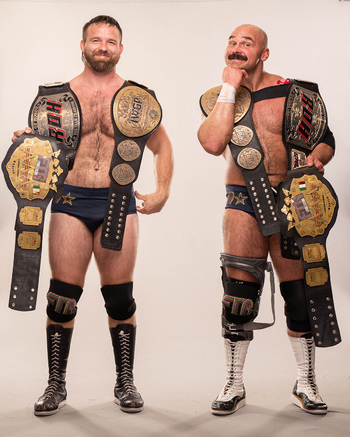 FTR is a Professional Wrestling Tag Team composed by David Michael "Dax" Harwood and Daniel Marshall "Cash" Wheeler, currently signed to AEW and best known for performing in WWE from 2014 to 2020 as The Revival. Initially brought together in NXT under the ring names of Scott Dawson (Harwood) and Dash Wilder (Wheeler), they were known as The Mechanics at house shows, though that name was shelved when they got to TV and they were simply called Dash and Dawson, before they were given the Revival name in 2016. After departing WWE, they renamed themselves simply as "FTR", a originally derogatory acronym started by The Young Bucks and Cody Rhodes ("Fuck the Revival"). What it actually stands for varies ("Formerly the Revival", "Fear the Revival", "For the Rage", "Follow the Rules", "Forever the Revival", "Fear the Revolt", "Fear the Revelation", "F*ck the Rest").

As usual, you can find more information about them on that other wiki