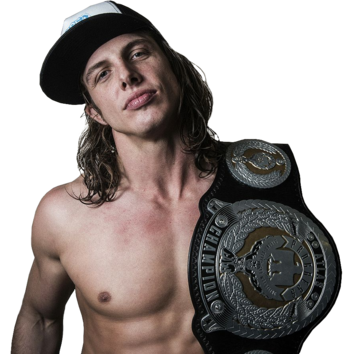 The King of Bros
"Broooooo..."
Advertisement:

Matthew Fredrick Riddle (born January 14, 1986) is an American professional wrestler and former mixed martial artist currently signed by WWE on its Raw brand, known for working for various indie promotions like EVOLVE Wrestling, Progress Wrestling and Pro Wrestling Guerilla (PWG). Starting out on The Ultimate Fighter with Ultimate Fighting Championship (UFC), he became known for knocking out Dan Simmler, a fellow MMA fighter, by hitting him in the jaw three times and breaking it in two places, which was called "the knockout of the century" by Quinton Jackson and "the biggest knockout in Ultimate Fighter history" by Dana White. He had a fairly successful career in UFC with 8 wins, 3 losses and 2 no contests before getting released from the company in 2013 after testing positive for marijuana twice.

In 2014, however, his popularity arguably skyrocketed when he started his Professional Wrestling career training in Monster Factory. He signed with WWN in 2016 and began working with EVOLVE, gaining fame for his hard-hitting style, sheer strength and lack of shoes. He debuted for PWG in the 2016 Battle of Los Angeles Tournament, being beaten in the first round by Kyle O'Reilly. He signed with WWE in 2018, competing on its NXT brand before moving to SmackDown and later Raw in 2020. He is a former two-time Progress Atlas Champion, the inaugural WWN Champion, PWG World Tag Team Champion (with Jeff Cobb), EVOLVE Champion, WWE United States Champion, and has won the Dusty Rhodes Tag Team Classic, NXT Tag Team Championship with Pete Dunne and Raw Tag Team Championship with Randy Orton.