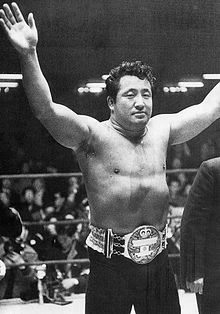 Mitsuhiro Momota (born Kim Sin-rak, November 14, 1924 – December 15, 1963) was a Korean sumo and Professional Wrestler and promoter as Rikidozan. He is celebrated as the "Father of Puroresu", or Japanese pro wrestling. He started his pro wrestling career in 1951, defeating every American wrestler who came to Japan. While he was a huge Face in Japan, he was booked as a Heel in the U.S., especially coming less than ten years after the end of World War II. He established and held many titles in the JWA (Japanese Wrestling Association), the first Japanese pro wrestling promotion which would later continue on into All Japan Pro Wrestling. Among his achievements, he was a 4x JWA All Asia Tag Team Champion

with Toyonobori, a 1x JWA All Japan Tag Team Champion

with Toyonobori and a 1x NWA International Heavyweight Champion

. He defeated Lou Thesz for that title and held it for over FIVE YEARS, right until his death from stab wounds on December 15, 1963. He also helped train Antonio Inoki, who would go on to establish New Japan Pro-Wrestling, and Giant Baba, who would create All Japan Pro Wrestling. He was inducted into the Wrestling Observer Newsletter Hall of Fame in 1996.