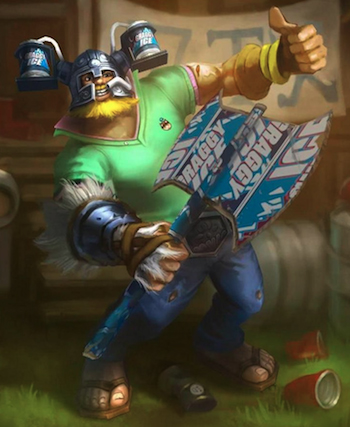 Brolaf, Lord of Bromacia.
"What is a bro? A bro is a eighteen to twenty-four year old male who wears birkenstock sandals, watches Family Guy, plays Ultimate Frisbee, and wears an upside down visor or a baseball cap with a pre-frayed brim. You know, a bro."
— Derrick Comedy, "Bro Rape"
Advertisement:

The Fratbro is a male college student or alumnus depicted in a stereotypical fratboy-ish manner. They're almost always unintellectual and usually want to party and drink all day, try to get laid all night, and will likely engage in Wacky Fratboy Hijinx. Despite the name, they don't have to be (or have been) in a fraternity.

As far as academics go, they live by the motto "C's get degrees," and the more well-off bros are often guaranteed a job under one of their parents regardless of school performance. For this reason they often study straightforward, business-related majors like accounting, marketing, real estate, etc. Rare is the fratboy that is studying to be a teacher or physician where they'd have to rely on their own skills and not personal connections. They're in college to party.

In a lot of ways this character is an evolution of the Dumb Jock stereotype as they often fulfill the same role, although the Fratbro will not necessarily be an athlete (he will at least be a big follower of sports, however). Also unlike the traditional jock, the Fratbro will often be a very big fan of soft drugs (particularly cannabis), and be portrayed as being pretty much harmless in comedic works, but darker examples will frequently throw in a proclivity towards Date Rape and a tendency (since they are usually from upper-middle-class/upper-class backgrounds) to attempt to use family connections to get them out of trouble.

This is a subtrope of Men Are Uncultured, specifically designed around the idea that it's "normal" for young men to behave this way and sow their depraved oats before stepping foot in the real world. The ones who can't let go of this phase in their lives may grow up to be a Jaded Washout or The Stoner.

Fratbros are usually Acceptable Targets in pretty much any work not aimed at this demographic, but to their credit, most fratbros aren't above self-deprecating humor. Often used as a Bromantic Foil to the male lead. One popular Aesop for this type of character is to become a Ladykiller in Love, especially if they Can't Act Perverted Toward a Love Interest. Whether or not it works is a toss-up, as this sort of character can easily imply that the audience Should Not Do This Cool Thing.

Compare Life of the Party and Wacky Fratboy Hijinx. Also compare and contrast with Hard-Drinking Party Girl, The Lad-ette, and All Guys Want Sorority Women, the rough Distaff Counterparts. A Frat Bro who is intelligent enough to land a tech job or start a tech company is a Tech Bro.