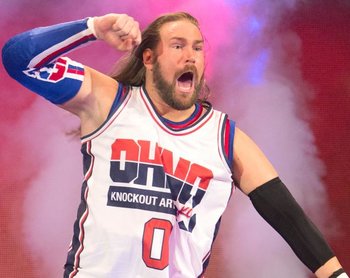 Who's your Hero?
Advertisement:

Chris Spradlin (born December 24, 1979) is an American Professional Wrestler from Dayton, Ohio. He has wrestled in no less than sixteen different promotions stationed across North and South America, Asia, Australia and Europe and is best known for his work in Ring of Honor and CHIKARA as Chris Hero. The German westside Xtreme wrestling is his home promotion away from home.

He debuted in 1998 and traveled to receive further training from Tracy Smothers, Johnny Saint, Skayde, Les Thatcher, Dave Taylor, Dave Finlay, Dory Funk Jr. and others, wrestling in various Midwestern indies. His first standout role came from Ian Rotten's IWA Mid-South in Indiana. In 2002, he debuted in CHIKARA, teaming with CM Punk and Colt Cabana as the Gold Bond Mafia. He turned heel on his SuperFriends partner Mike Quackenbush in the finals of the 2005 CHIKARA Tag World Grand Prix, costing his team the match against Claudio Castagnoli and Arik Cannon. This led to Hero, Castagnoli and Cannon forming The Kings of Wrestling and effectively shaped CHIKARA for the foreseeable future. Hero and Castagnoli would defeat Milano Collection A.T. and Skayde to win the 2006 Tag World Grand Prix and become the inaugural CHIKARA Campeones de Parejas

Between 2012-2013 he was in WWE's revival of Florida Championship Wrestling and later, its developmental system NXT as Kassius Ohno before getting released, though it was far from being the end of Chris Hero's wrestling career, as he would go on to win the EVOLVE Wrestling Championship title and the All Pro Wrestling World Wide Internet Championship belt.

In January of 2017, recordings of an NXT taping surfaced on the internet, revealing that Chris Hero had appeared on the show as Kassius Ohno. WWE uploaded footage as well and broke the news on social media, making the announcement of his re-signing with the company all but official.