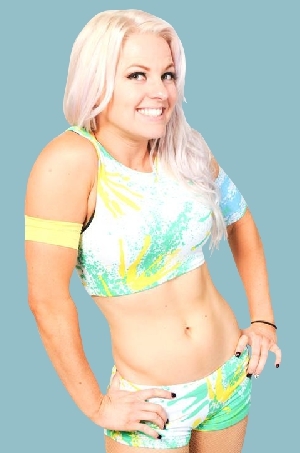 Candice Gargano (née Dawson) (born September 29, 1985) is a Canadian professional wrestler who debuted in 2002 as Sweet Candy, before becoming better known by the ring name Candice LeRae. She is best known for her work on the American independent circuit, for initially for the Empire Wrestling Federation before breaking out into promotions such as Pro Wrestling Guerilla and CZW. She is a former PWG World Tag Team Champion, Fighting Spirit Pro Tag Team Champion and Dreamwave Tag Team Champion with Joey Ryan as The World's Cutest Tag Team.

In 2017, Candice first appeared on NXT, participating in a battle royal to determine the number one contender for the NXT Women's Championship, held then by Asuka. She has made sporadic appearances in NXT since then. She also wrestled in the WWE Mae Young Classic, defeating Renee Michelle in the first round and Nicole Savoy in the second before losing to Shayna Baszler in the quarter finals. She was officially signed by WWE in January of 2018, and made her debut at Takeover: Philadelphia alongside real-life husband Johnny Gargano.

She had numerous feuds with the likes of Shayna Baszler and Io Shirai before turning heel in April 2020. She's taken on the moniker "the Poison Pixie" and is now the co-leader of The Way (as in, "The Gargano Way").

After months of inactivity, due to pregnancy, along with Gargano's release from contract with WWE, Candice would be released from the company on May 6, 2022.