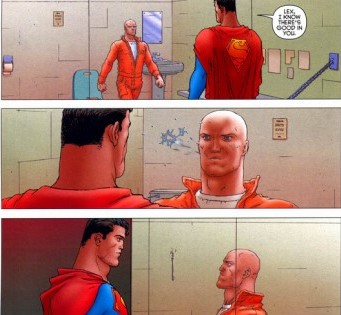 That's the good in him splattered on the glass.
"I spit in the face of people who do not want to be cool."
— Carlito Colón

There are many ways to show how much contempt a person has for someone else. One classic way is through spitting. In general, spitting is considered a rather rude, disgusting and unsanitary habit. Spitting on another person is also a form of assault. When somebody is forced to wear that spit on their face? Well... that can be a bit insulting. This can be used by any character, whether they be the protagonist refusing to Kneel Before Zod, or the Defiant Captive's retort to I Have You Now, My Pretty, or the villain rejecting the hero's offer of a Last-Second Chance.

In fiction, Spiteful Spit usually shows up in three flavors:

How someone reacts to being on the receiving end of this trope can say quite a bit about them. If they lash out instantly, they may be Hot-Blooded or Not So Stoic. Alternately, a Consummate Professional or The Stoic might instead calmly wipe the spit off (if they were spat on directly) or simply ignore it.