Literature / Splinter of the Mind's Eye 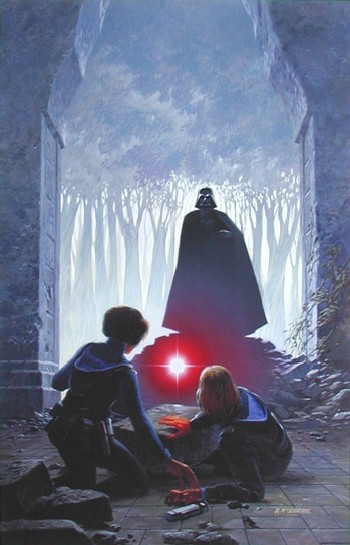 Splinter of the Mind's Eye (Wookieepedia

) is a novel of the Star Wars Legends continuity. Written by Alan Dean Foster (who also ghost-wrote the novelization of A New Hope), it is set chronologically between the events of A New Hope and The Empire Strikes Back.

On their way to a conference with a local resistance group to try to convince them to join the Rebel Alliance, Luke Skywalker, Princess Leia, R2-D2, and C-3PO crash-land on a swamp planet named Mimban, which is crawling with Imperial stormtroopers, unpleasant natives, and wildlife out to have them for dinner. In their bid to get off the planet they enlist the aid of an old, marginally Force-sensitive woman named Halla. Her aid has a price, though: She wants them to assist her in acquiring the fabled Kaiburr Crystal, which can greatly enhance Force powers. They soon discover that they are in a race against Darth Vader, who is out to claim the crystal for his own purposes. After putting Luke, Leia and the droids through a series of misadventures, the book climaxes with Luke and Leia dueling with Darth Vader for possession for the crystal.

Published in 1978, Splinter of the Mind's Eye is notable for being the first novel set in the original Star Wars Expanded Universe (now branded as Legends), and was to be the basis of a low-budget sequel in the event that A New Hope was not as successful as it ended up being. Splinter of the Mind's Eye is controversial among many Star Wars fans due to the confrontation between Luke and Vader chronologically set before The Empire Strikes Back, as well as the romantic tension between Luke and Leia (it was written before George Lucas decided that they were brother and sister), resulting it becoming Fanon Discontinuity among some fans later. However, a comic adaptation of Splinter of the Mind's Eye was published in 1995 and the events and characters of the book have been frequently referenced in later official novels and in-universe reference works, leaving no doubt that it is considered to fall within the Legends continuity.

Note that Lucas eventually revisited the idea of a daring adventurer and the woman he's falling in love with battling a totalitarian regime for a powerful mystic artifact. That one did have Harrison Ford in it.

Splinter of the Mind's Eye, the novel and comic book adaptation, provide examples of: