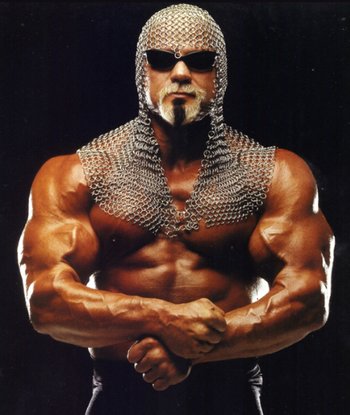 Big Poppa Pump, doing TV Tropes an egg.
"To all my freaks out there, Big Poppa Pump is your hook up! Holla if ya hear me!"
Advertisement:

Scott Steiner, AKA Big Poppa Pump, AKA The Genetic Freak, AKA The Big Bad Booty Daddy, AKA real name Scott Carl Rechsteiner (born July 29, 1962), is an American professional wrestler maybe best known for his distinctive chainmail coif and multicolored beard, his obscenely muscled figure and his tendency to go overboard when presented with a mic.

He works either alone or as one half of The Steiner Brothers, a tag team with his real brother, Rick. After starting in Dick the Bruiser's World Wrestling Association in Indianapolis in 1986, he went on to work in Jerry Lawler's Continental Wrestling Association in Memphis before joining his brother Rick in late Spring-early summer 1989 in WCW. They stayed until around the end of 1992 and debuted in WWE at the start of 1993. They left in 1994 and went to their other home in New Japan Pro-Wrestling. They also made some appearances in ECW in 1995 before returning to WCW in early 1996, staying all the way to the bitter end. Aside from international tours, they largely went their separate ways after that. Scott returned to WWE at Survivor Series 2002, had a notoriously bad match with Triple H at the 2003 Royal Rumble, and stuck around until 2004. Scott has had a few runs in TNA since 2006, either on his own or teaming with Rick, along with various independent and Japanese appearances. Among his in-ring achievements, he is a former WCW World Heavyweight Champion

. Unlike the other tag team titles mentioned here, he held that last one with Booker T.

In 2022, he and his brother Rick were inducted into the WWE Hall of Fame as a group.

"TO ALL MY FREAKS OUT THERE, BIG POPPA PUMP IS YOUR HOOKUP! HOLLA IF YOU READ MY TROPES!":