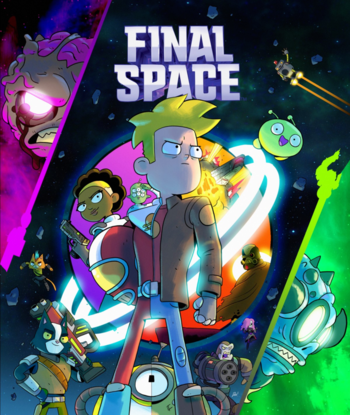 The universe is much more bigger than you think!
Lord Commander: You have no idea, do you? Mooncake is the key. That being can unlock... Final. Space.
(Beat)
Gary: What the mother-loving crap is Final Space?!
Advertisement:

The serialized Sci-Fi series follows Gary Goodspeed, a futuristic astronaut with a big personality, as he waits out the last days of his five-year sentence aboard the Prison Ship Galaxy One. He soon runs across an adorable green Planet Destroyer named Mooncake and a Cat Folk bounty hunter, Avocato, and finds himself embroiled in a desperate mission to unlock the mystery of something called "Final Space" and save the universe from total annihilation... while also keeping Mooncake out of the hands of the villainous Lord Commander and his forces.

And that's just the icing on an universe-sized cake...

, but went on hiatus three episodes into its planned ten episode run, only to re-emerge six years later as a professionally produced and drama-heavy pilot

which quickly went viral and caught the attention of former The Simpsons writer and TV producer Conan O'Brien, who would go on to serve as the executive producer for the show. Originally, it was going to air as part of a TBS animation block that would have featured J.G. Quintel's Close Enough and a show called The Cops created by Louis C.K. When Louis C.K.'s sexual misconduct scandal came out, The Cops was shelved indefinitely (if not outright canceled before it could premiere) while Close Enough was shelved until 2020 (when HBO Max was released). Final Space, however, aired anyway and the fourth show in the line-up (American Dad) continued.

Featuring a star-studded cast which includes the likes of David Tennant, Ron Perlman, Gina Torres, Tom Kenny, Steven Yeun, Rogers himself and his friend Coty Galloway, the show premiered its first season on February 26, 2018. In 2019, the show was moved to Adult Swim, where its second season premiered on June 24. Afterwards, each episode of the new season aired on TBS a week after its initial Adult Swim airing. A third season was confirmed a week after the Season 2 finale aired, and premiered in March 2021.

by Olan Rogers on his Youtube channel that the series had been canceled. However, in January 10th, 2022, the announcement of a VR game taking place in the universe of the show has been made

, set to release in Oculus in January 13th and later on Playstation VR & Steam.

Example of:
Would Rather Suffer