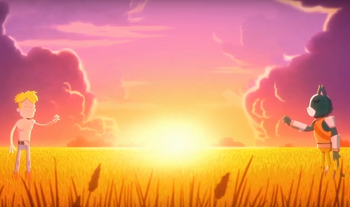 "I do feel you, baby."
This show is crammed with these moments. It's to be expected from an Olan Rogers production, who seems to have a fixation with bromances to begin with.
Advertisement:
open/close all folders
Avocato/Gary
KVN/Gary
Other